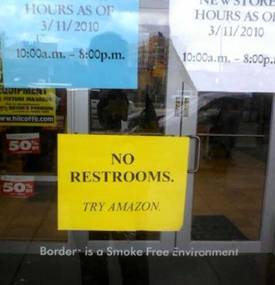 Yesterday, I went to a 70%-OFF-WE’RE-CLOSING-GET-DEAD-TREES-NOW Borders location. It was big bold letters on Day-Glo yellow and Blood-Spatter red, empty shelves and fixture sales.

You know you’re in trouble when you have to sell the shelves as well as the books.

The books were all shelved like authors would ideally hope: each book with its own spot, title and author proudly (?) displayed. Islands of misfit books, the remnants and remainders and left-behinds. Three sections of romance bleeding over into science fiction and fantasy (which, let’s be honest, isn’t far from the truth sometimes). Lots of young adult, following previous publishing trends, and lots of titles and authors that make me feel a little less bad for Borders in the first place because it makes me think that when they’re publishing that, they’re asking for it: Twilight, Going Rogue, Glenn Beck.

And even despite the 70% off, even despite new titles steeply discounted, I browsed and, when I saw something interesting, thought, yeah, I’d pay seven bucks for this hardcover, or I could go home, pay the same-ish, and have it on my Kindle.

I left with four books (I paid 75 cents for Wolfe’s The Right Stuff. 70% off a Bargain price. Not like Wolfe would have seen any money from either sale anyway) and a couple of DVDs and an extended-cut Bluray of Taken. I paid $40 and wondered whether any authors would see any of that money or it would go straight to Borders executives before it went to corporations.

I don’t know how many stores Borders is closing, but I have a feeling it won’t stop. It’ll be a slow process to start with, but then, at some point, when it’d be silly not to, I think Barnes & Noble will buy the entire operation for pennies on the dollar, at which point there will be one large chain with more than 1000 stores and then a few regional chains and then a few independent chains and then independent stores. Plus Costco and Walmart and Target.

I was looking at numbers for the retail publishing industry. Books-A-Million has something like 200 branches throughout the south, and then the next-largest chains are Hastings (with 149 stores).

And then Hudson, which is more newsstands in northern New Jersey, and then Book Rack and Powell’s, and then a Michigan-based store. There are some independent chains, which I think means it’s owned by one person who’s not so beholden to shareholders.

Because one has to wonder: where is it going? What’s going to become of reading and literacy?

Here’s what I think, at this point:

Within ten years (and probably sooner), we’re going to see the death of big bookstores (like Borders and Books-A-Million). In terms of corporate retail, we’ll see books in the usual places–Target, Walmart, Costco–and mainly big names, movie tie-ins, or books with a huge amount of buzz (Franzen, Gruen, etc.).

Independent bookstores will gain some traction, but not a whole lot, because opening an indie bookstore is daunting.

Where will this leave corporate publishers? I have absolutely no idea. I don’t know where they think they’re going to sell books, now that Borders and B-a-M are basically gone and B&N is concentrating on nook. What’s worse is the uncertainty; it takes forever to publish a book. From first submission to final publication, in general, it’s–charitably–a five-year timeline (including lots of rejection and revision), and that’s if you’re good and ever get beyond submission.

(Given that, the idea of signing a publication contract right now, with anyone, would terrify me. What rights get tied up where, and for how long? What about non-compete (most publishing contracts have included clauses that, while with a certain house, writers would not publish other work elsewhere)?)

Finally, Kindle will dominate e-readers. iPads, nooks, and Sony readers will compete and share the market, but for the most part, iPads and nooks will become more akin to tablet computers on which one happens to be able to buy books. That’s if Kindle stays on track as it has, with e-ink screens (even if hybrid) and pricing. When you consider that the original Kindle cost nearly as much as an iPad but that it now costs less than $150 in just a few years, I think that’s pretty remarkable. I think it’s going to continue to drop in terms of price, and I wouldn’t be surprised if we saw the first sub-$100 Kindle later this year. In fact, I made this very prediction elsewhere, on Facebook, five days before Amazon announced the new $114 ad-subsidized model.

Borders’ bitterness (if the sign is to be taken at face value) toward Amazon is arguably understandable but ill-founded. It makes a good Internet meme, certainly, and it was all over Twitter and even hit BoingBoing, but it belies greater discussion.

It’s a good joke that Borders would be bitter. It’s less of a joke than that the current book retailing climate seems to be tipping, and that its previous set up is what is bringing it inexorably down. This is how business and commerce work, especially with regard to media, which changes constantly; Borders is merely going the way of Blockbuster and Tower, mainly because bookselling sometimes concentrates more on the books and less on the service.

It’s amusing to think of Borders as being bitter toward Amazon. But really, the plain fact is that one doesn’t need to leave the bathroom in one’s own home to shop at Amazon. Which is nice. Silly Borders: we go to Amazon for books (and electronics, and Kindles, and everything A to Z); we went to Borders for coffee. Sometimes. We went to browse magazines and skim books we just put back on the racks and then bought later, on Amazon, for less.

The stories haven’t gone anywhere, and they won’t. It’s just the delivery of stories that will change.

As I write this, Borders is closing stores while Barnes & Noble shifts to focus on nook and nook color, which might make sense, because as I wrote this, the Amazon Kindle surpassed 800,000 fans on Facebook. People seem to love their Kindles as much as they’ve loved their favorite books (although the same might be said for the iPad, though in a different way, considering the iPad’s lack of dedication).

Yesterday was the first time in months I’d visited a bookstore at all. But since the beginning of January, I’ve spent several hundred dollars on books, none of which have been used. Already, this year, I’ve spent more on books than in several years before. I’m reading more, and more widely. I don’t think I’m alone.