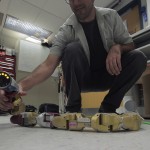 Robot city: how machines are driving the future of PIttsburgh

After more than a century, steel production in Pittsburgh is all but over, leaving in its wake industries based on higher education, health care, academic research, and robots. Lots of robots. And when it comes to robots, the goal is more focused on building a framework for the future than an infrastructure from the past. And for that reason, the city has become a place where far-flung ambitions are supported and encouraged, even if the end goal is a long way off. Sometimes it’s as “far off” as the moon.

Always nice to see Pittsburgh get some love!