The Prodigal Hour, Chapter One

July 1, 2011 / Will Entrekin / Comments Off on The Prodigal Hour, Chapter One

“It is not unknown to me that many have been and still are of the opinion that the affairs of this world are so under the direction of Fortune and of God that man’s prudence cannot control them; in fact that man has no resource against them. For this reason, many think there is no use in sweating much over such matters, but that one might as well let Chance take control.”

-Niccolo Machiavelli, in The Prince

“Do I dare
Disturb the universe?
In a minute, there is time
For decisions and revisions which a minute will reverse.”
-T.S. Eliot, “The Love Song of J. Alfred Prufrock” 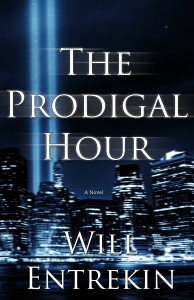 Chance Sowin hoped only for a new beginning.

Halloween 2001 found Chance driving the narrow streets of the development in which he’d grown up, headed home. Six weeks before, he’d hustled out the main entrance of the World Trade Center only an hour before it fell, taking all that business and life, along with Chance’s temp job at a law firm, down with it.

Chance hadn’t been sure what to do next. His father, Dennis, had suggested he come home. “Take some time,” his father had said. “Sort yourself out. All the time you need.”

Chance had been uncertain about it until he’d realized there was no longer anything keeping him in Manhattan, and familiar sounded good. Familiar sounded just about right. And so he’d packed everything he owned into a compact rental car and taken the Jersey Turnpike south, and now he pulled that car to the curb in front of his childhood home, a long, flat rancher. He squeezed the steering wheel as he took a deep breath, as if to steel himself, though for what he didn’t know, and then he got out of the car and stepped up the curb and was struck by déjà vu like sudden density goose-prickling up his neck: You’ve been here before.

Of course he had: he’d grown up here, after all, played stickball at the foot of the cul-de-sac, even tripped and busted his baby teeth on the very same curb he stepped up, but what crawled his skin was not simple familiarity. It was stronger, stranger, and it made the world seem hyper-intense, the October leaves speckling the lawn more vibrant, the afternoon light more glaring. It persisted as Chance crossed his lawn, until he saw the front door: brief space between the edge of the door and its jamb, wood splintered where the deadbolt had broken. Chance felt two simultaneous emotions collide.

First: uncanny familiarity—of infinite broken doors on infinite splintered days, over and over again—followed then, as lightning by thunder, by cold, brutal fear.

Chance eased the door open with his palm. A dead leaf skittered inside, and daylight dazzled the hardwood floor of the foyer beyond golden. Chance’s own shadow spindled into the hallway, reaching toward the kitchen, and the walls hid in the dark like they were scared.

Not just the foyer, the hallway, the kitchen: the slant of light against the grain of wood. He knew these sounds, too—the desiccated scatter of that leaf, the soft whisper of the door’s weatherstripped bottom against the floor—but it was not merely familiarity. It was more like a multi-dimensional echo, sounds and sights crossing and re-crossing each other at sharp angles and crazy tangents.

He would have called out to his father except the house seemed too quiet; instead, he eased into through the hallway, and barely restrained from gasping when he saw the living room had been ransacked. Desperate, seemingly searching domestic chaos, the thought of which tightened Chance’s stomach into a warm, dense ball of anxiety and violation. Tableaus like the one Chance was staring at were not supposed to occur. Not in the house where he’d grown up, not in the very same living room in which he and his parents had set up the Christmas tree.

Where is safe when home is not?

Chance swallowed, surprised to taste bile. The back of his jaw ached as his mouth watered, and he swallowed again, fought to make it work, keep his gorge down. His breath whooshed out, but as he inhaled he began to troubleshoot, problem solve.

He flipped open his cell phone to dial 911. A woman answered.

“There’s been a break-in. Four five one Bradbury Lane,” Chance whispered, his voice low and measured, then hung up while the woman was still talking. The cell’s display read 1:57.

Chance held his breath, listening, as he moved farther into the house, until he heard sounds from the basement, just through the kitchen. Chance crept toward the wide-open basement door and descended the stairs on his toes. A voice: his father’s, urgent, anxious; another he didn’t recognize, more urgent, demanding.

Dusty sunlight fragile as old spiderwebs filtered through windows set high in the basement walls, and a thin slant of light marked the door to Chance’s father’s office. Chance crossed carefully toward it, then heard the unfamiliar voice: “Where is it?”

Followed by his father’s: “I’ve worked too hard.”

Before Chance could consider that thought, a glimpse into the office chilled him. A man in a black mask and body suit pointed a gun that looked twice as long as it should have at Chance’s father.

In college, Chance had studied martial arts, and his training overtook his perception, then,

as he leapt through the doorway,

who rolled even as he fell.

time snapped back to the room and a lot of things happened at once: a sound like rapid-fire sneezes caught; Chance’s father cried out in pain, fell; Chance kicked the gunman, who caught Chance’s foot and lifted.

Chance fell but twisted to his side, scissoring his legs sideways around the gunman’s ankles to yank them backward. The gunman fell hard, and when his gun sneezed again as it hit the ground, the computer monitor popped in a flash of sparks and singed ozone.

The man twisted and fired his gun again, again. Chance dove as finger-sized holes punched into the wall behind him, but then the man smashed the butt of his pistol across Chance’s face. He staggered backward, then doubled over when the man hit him in the solar plexus, before white-hot pain seared across his shoulder so hard he spun around and crumpled to his knees.

Two more shots pokked into the carpet, but then the gun’s barrel sprung-locked empty. The man pushed it forward like he didn’t want it to be empty, then tucked it to his side as he turned.

Pain like a brand flared down Chance’s left arm when he tried to put weight on it. The air seemed to gain density, tightening around his head and pressing darkness into his vision. When he heard distant ringing gaining volume, Chance at first mistook it as tinnitus before he realized a siren was approaching.

The gunman sprinted from the room, his footsteps quick across the basement to the stairs. Chance tried to ignore the pain and forced his body forward, but adrenaline-surge and flight-response clouded his perception, and he gagged on white-cold nausea when his shot shoulder bumped the door. Sweat sprang out on his head, and he groaned, blinking back tears. He tried to push off from the jamb, hoping the momentum would carry him across the basement; if he could just get to the stairs he could shake it off, he could make it—

Chance turned. The room wobbled. The floor threatened to pitch him sideways.

His father lay on the ground. Furious crimson stains had blossomed on his white shirt.

Crossing the room felt like wading through the floor. Chance knelt. The wounds looked worse up close.

His father swallowed, made a face as if he had tasted something sour. Tiny gagging sounds came from the back of his throat, and he breathed in small spurts. “I—,”but his voice closed on him and nothing more came. He fidgeted a thin silver chain from his shirt collar, twisted it free, then pressed his hand to Chance’s, forcing something small and pointed into Chance’s palm, closing Chance’s fingers so hard around it that it hurt. His father’s fingers slacked, and Chance opened his hand: a small, familiar, ring with an ornate filigree design and a large sapphire set behind the crucifix jutting from its crest. What little light made it into the room gleamed around the circumference to twinkle like a tiny star that seemed finally to explode, a hot blast of white light that washed the world away and left Chance to the darkness beyond.

Nothing like starting with a bang, right? I hope so. The next chapter will post in just a few days. If you can’t wait (and I hope you can’t), you can get the whole book, all in one go, right there, for less than five bucks.

The First Blurb for The Prodigal Hour