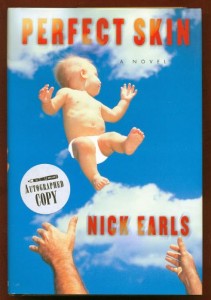 First, it’s about a single father. And how often do we see single fathers? One might make the argument that it’s because single fatherhood is more rare than single motherhood–and it may well be–but I still think it’s a pretty rare depiction.

Second, that single father is a dermatologist with a busy practice, and he’s in his mid-thirties. What I found interesting right away is that normally, when you get one of these sorts of books with such a protagonist/narrator, there is something somewhat stunted about that narrators development. One of the general directions these books take is the growing-up of the narrator, or the finding of a good relationship.

Because so many of the books in this genre tend to focus on relationships. Usually with significant others. So sometimes the books end up feeling a little like the literary equivalent of a romantic comedy.

This book is not a romantic comedy. Though it is absolutely hysterical in places.

In all the others, it’s rather poignant.

The story–such as it is–is that Jon, our thirty-something dermatologist, is newly single with a six-month old daughter he calls the Bean.

It’s about a lot of things. It’s about being both newly single and newly a father at the same time. It’s about dating, of course, to some degree, and it touches on relationships, but not in ways like you’d expect. Or like I would have, anyway.

I’m not doing a very good job of selling this, I know, but a story:

I graduated college with a guy who took the same track I did. Literature and Biology. He ended up going to med school, becoming a doctor. He’s now in the Army, and I hope doing well (I haven’t heard from him in a while. Sometimes, I worry. He’s one of my best friends though I haven’t spoken to him in going on three years). He always read as much as I did, though we had different tastes; my thesis was on Doyle and Williams, whereas his concentrated on Fowler and The Collector. Mine focused on the connection between science and art; his on the disconnection.

One day, I recommended Perfect Skin to my then-still-in-medical-school friend. He later picked it up.

Three days later, he wrote to thank me. He said it had come along at a unique time for him, and touched him in ways he hadn’t expected, and he relayed that he often wrote notes after the end of a book. Just some notes on those few blank pages before the end to record the book itself and how it had made him feel, and what he’d thought of it.

That time, for that book, he wrote only one word:

It’s that sort of book. It’s subtle in ways one wouldn’t expect, and the issue of Jon’s single fatherhood and how he came to be a single father is sort of danced around in ways. For example, as it begins, he doesn’t acknowledge it. He just talks about his daughter, and baby things, and running things, and changes in his life, and early on he has a conversation with a female student he meets when he’s running, and you get the distinct impression that he’s keeping as much from you as he keeps from the student. Not that it’s on purpose. Not that he’s unreliable.

Just that he’s so wrapped up in his little world, in his existence, he just doesn’t really think about it in any other way.

I think one of the main reasons it works is that it’s so clearly not about relationships, though there is some dating. It’s about life, and expectations, and I think maybe it’s most about how actualizing himself is how Jon most becomes a father, but I think it captures something about masculinity there, too. I can’t speak for all guys, but there is something about masculinity that includes this idea that you’re not supposed to admit you don’t know or can’t do something because it’s not really manly to admit a limitation or weakness. Sometimes, however, it’s worth noting that fear about marriage or fatherhood comes not from a place of perceived commitment phobia but rather from a place of terror about not being good at it. I know a lot of guys who might have run screaming from the idea of fatherhood not because they didn’t want children but rather because they were terrified they might not be great fathers.

It’s a really great book, and on a scale of stickers to lasers, I give it a cancer-free.

And I’ve just realized I should probably point to these books’ pages, shouldn’t I? Here’s its Goodreads page. It doesn’t appear to be available for Kindle, sadly.

Such a Thing as Independence (in Film, Music, and Writing)