Review: Austin Grossman’s Soon I Will Be Invincible 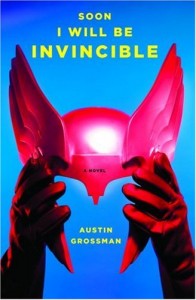 First, it’s completely coincidental that my most recent review before this one was of Austin’s brother’s novel The Magicians. Truthfully, I read them several months apart, and it really doesn’t matter, anyway, because they’re so different.

I’ve read a few superhero novels lately. Superpowers disappointed; it started well, but then it failed to really come together, or even have much in the way of a plot. My friend Aaron Dietz recently published a sort-of novel called Super, which I call a “sort-of” novel because it’s not one in the sense of having a linear narrative or plot; it’s experimental fiction that tells its story (which is compelling) through clever uses of graphs and applications and forms. It’s a rather ingenious concept that might well make it impossible to reproduce for Kindle; so far, it’s available on Amazon (and from other fine booksellers) by way of Emergency Press (you can also read the work via Scribd on Aaron’s page there, which is totally rad).

I don’t have one, and cannot, and so the closest I can get is superhero fiction. Superman. Iron-Man. The Matrix (which might well be one of the finest superhero origin stories ever, after the movie version of Iron-Man).

Soon I Will Be Invincible is one of the finest examples of superhero fiction I’ve encountered.

The story is told from the POV of two central characters: a supervillain named Doctor Impossible, and a superheroine named Fatale. The former is the smartest man in the world; the latter is a female cyborg with robotic augmentations.

Now, the interesting thing, to me, about superhero stories that they generally reverse the hero/protagonist and villain/antagonist situations. In most mainstream stories, one thinks of the hero and the protagonist as the same person (and one would be mostly right), and the hero/protagonist is someone who wants something, and has a clearly defined goal, and pursues that goal despite obstacles, generally embodied by the antagonist/villain. Antagonists can be people, but they can also be nature and other such things.

In most superhero stories, that dynamic is reversed: most heroes don’t actively want anything besides to stop a villain. Maintain the status quo.

Examples: Superman doesn’t really want to make the world a better place–most of the time, he’s just stopping Lex Luthor from conquering it (sorry. Bad example. It’s been a crazy long time since I last read a Superman comic book. Or any comic book, for that matter, sadly). Batman wants something: to stop crime.

If there were no crime, what would Batman have to do? One could easily argue that, psychologically, Bruce Wayne is troubled/disturbed enough he’d figure something out, but speculation isn’t easy. Especially considering that he’s the head of Wayne Enterprises, which is, in its world, one of the most powerful corporations on the planet. Lex Luthor wishes he owned Wayne Enterprises, because it’s probably more powerful than LexCorp.

There are analogues to comics, too. The core team is Damsel, a super-powered heroine; Blackwolf, a middle-aged man without superpowers who’s trained himself into a great crimefighter; Mister Mystic, a guy who’s, well, mysterious; and several others. Basically, Wonder Woman, Batman, and Doctor Strange, respectively.

They’re not rip-offs, by any stretch. Homage, perhaps? I’m not sure.

(A sidenote: I have a pet project I think of as story theory, which explores the idea that, in a given situation, you’re going to have elements in commonality. So, take Blackwolf/Batman–of course they’re similar. But if you want a guy without superpowers to be obsessed enough to become a superhero through sheer force of will, there aren’t a whole lot of different ways to execute that story, and you’re going to end up with similarities to other stories.)

Which Grossman is using, and which might be one of the problems with the novel. It’s set in a sort-of alternate present-ish kind of scenario, where superheroes are rather common, and have been for years. Which allows Grossman a full scape to make use of, except that he doesn’t really do so; there are hints of and nods to and even stories about the world and its history, but one gets the sense one is merely scratching the surface.

Oh, and there’s a missing superhero, Corefire, who’s basically Superman but who is also, it turns out, related in ways to Doctor Impossible. Which I don’t think is a spoiler, really. I’m pretty sure that’s mentioned early on, and even if it weren’t, how many superhero stories do you know of wherein there isn’t some deeper relationship between the characters than they’re just the hero and villain?

Overall, I dug the book a lot, but I’m realizing that I finished it a few weeks ago and some of the details have already hazed. Which is interesting, and makes me think of the two Grossman brothers’ books together. They’re very different books, obviously, in very different ways, but I also think they’re demonstrative. Lev’s The Magicians was ambitious and, arguably, tried a lot more than Soon I Will Be Invincible, but ultimately suffered for it and couldn’t either bring it all together or fully execute it; on the other hand, Austin’s book (that’s this one), succeeded better in not trying as much. It’s perhaps less ambitious but overall, as a novel, better for it. It holds together.

On a scale of J’onn J’onzz to Clark Kent, I’m giving this one a Barry Allen. It’s not one of the lower-tier superheroes from Justice League Antarctica, but it’s not quite a Superman, either.