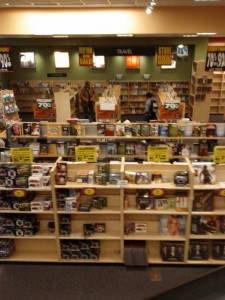 Today, the Association of American Publishers released their findings for February sales figures in publishing.

They are both encouraging and daunting.

I think the most important trend is the simplest:

Yesterday I posted about going to a going-out-of-business Borders, and included some thoughts about the future of the publishing industry. Which, I think, is very much up for grabs.

One thing I keep reading is people proclaiming that publishing is a business. It’s one of the first reasons people cite when corporate houses bestow ridiculous advances on unproven writers who have good otherwise platforms–by “otherwise platforms,” I mean they’re reality show stars, or actors, or political candidates. The overarching idea seems to be that publishers can use those platforms to make those unproven writers successful authors, and there are varying degrees of success achieved.

It is, however, a false assumption, on several levels, not least of which is that initial one of publishing as a business.

Because, you see, publishing is not, actually, a business.

Publishing is, simply, the distribution of information. The act of making information available to the public.

That’s not a business. That’s a service or action.

I think where the disconnect comes in is that over the past hundred or so years, corporations have sought to build a business model from that service. In other words, corporations’ monetization is what made the publishing industry a business. Not the act of publishing.

As recently as just several years ago, however, there was only one way to make information in the form of words available to many people, and that was to print those words on the thin pulp of dead trees and distribute the resulting object to retailers. Pulping and printing and shipping are expensive processes, which meant that the cost of making printed information available was high, and pretty much the only way for the people creating the ideas to access that system was to partner with bigger companies who already had access to it, or at the least the means and resources to make those ideas tangible.

Which is to say: it’s expensive to print and distribute books, and the only way many writers could do so was to partner with publishers who already were.

Is it already pretty apparent where I’m going with these thoughts?

Nowadays, the problem isn’t distribution of information. That’s easy. So too is accessing that information.

Many people come back to publishers when the idea of filtering comes up. The thrust of the argument being that publishers’ main function is one of vetting and quality assurance, except this neglects the simple fact of publishing companies’ motivation, which is to make money from publishing. Of course, some publishers (and by extension, agents and editors) are in it for the love of books, but even still, they are part of a group that seeks to make money from making information available.

As such, I believe, those motivations are biased.

According to that AAP study I linked to, print still outsells digital by a substantial–though not huge–ratio; ebook sales were at $90.3 million, while trade sales were about $215 million (including adult and young-adult).

It’s unlikely that print will remain ahead of digital. I’d say ebooks will fully surpass print by next year.

Not that we’ll see the death of print. Print will never die, nor will paper books. It’s not a binary choice. Nobody is saying that people have to give up paper now that ebooks are on the rise, and I doubt anyone ever will. Digital is merely one more format, one more option for readers.

As these changes take hold, we’re going to see a lot more people distributing information in new and exciting ways. What I think is important is to be open to all opportunities.

An Interview at The Evolution of Nikki