Good writers know that revising is best accomplished when they have achieved some distance from the work they are revising, and I’m inclined to agree with them. There’s also something about reading something concretely and tangibly that changes the reading experience. I’ve found that reading something on a page completely changes the nature of anything I’ve already written on a screen, and I’ve tried to use that distinction to my advantage. Whenever I’ve finished something new, when appropriate, I’ve formatted, designed, and laid out the work; uploaded it to Lulu; and had printed and shipped a copy I’ve taken a pen to.

I haven’t held back when I’ve done it. I’ve attempted to make whatever I’ve ordered as close to a fully realized product as it might be. Which is to say, it’s not just about having it printed and in my hands. It’s about doing my best to make it what I’d hope everyone would hold when they had it in their hands. Having what is basically a fully designed prototype–for lack of a better word–helps me.

When I finished Meets Girl, as a manuscript, I let it sit for several weeks while working on other projects (namely, Certainty, a new curriculum, and a new job). I knew I wanted to revise it, one last time. I knew I’d hit it, for real, but I also knew that hitting it, for real, didn’t mean it was perfect. There was more to polish. Some spots, I knew, were going to be rough. Heck, a couple I’d written to hold a place because I knew telling the story for real was going to be my highest priority.

Still, I knew I’d nailed the execution, for the most part, and all that was left was the polish. In the meantime, I continued to query The Prodigal Hour. I thought about querying Meets Girl, but I held off, as I wasn’t sure it fit either corporate or independent publishers.

So I wanted to revisit it, one last time. I wanted to attempt to see it objectively, on its own, and the nearest way I could make it seem like something I hadn’t written myself was to actually make it a book.

So I went to Lulu. I published my collection through Lulu, and I think it looks pretty great. It doesn’t embarrass me when people ask me to sign their copy, for sure. I laid out Meets Girl, mocked up a cover, clicked publish, and ordered a copy.

I didn’t expect much. I expected something that looked pretty good but needed some work. I expected to have to work on it. That was the point.

It came in a package like an envelope. Just a single copy. But when I opened it, when I held it in my hands, I thought, “Fuck. I want this book.”

It looked way better than I’d expected. It looked like a book that would catch my attention if I were walking past the “New Fiction” tables on my way out of Barnes & Noble. It was a cover I’d turn around for.

And the text . . . I’m not going to lie. It definitely needed polishing and refinement. Which is why I took out my pencil and marked the shit out of it. And then I gave it to my editrix, who proceeded to work her way through three separate pens–two blue and one black–as she inked in her comments and edits. The thing the edits demonstrated, though, only corroborated the original thought: the story worked, and the text needed to match it.

When I got back the edits, I ran through a full-on, word-one revision. I cut and pared. I added a scene that had been in one of the previous drafts but not yet made it to the final. I started with the first word (“Once”) and eyed, with great suspicion, every next one until the last (if I told you the last, I’d spoil the fun!).

Moreover, I tweaked the lay-out. I increased gutter and checked the margins. I got totally OCD about pagination, widows, and orphans. I even added a few finishing touches to the cover.

(More writers should write paragraphs like the above more often.)

When I finished, I thought it was time to take a risk. I’d wanted a copy of the one I’d already received, and I knew the revision was going to be even better, so I ordered ten copies. Some are for advance review. Some are spoken for.

Some, we’ll figure out.

All of this is to say, I got them today.

And I have to say: Holy fuck.

I’m sorry. I hope my use of strong language doesn’t offend. But here I am, having only a few hours ago held a beautiful, fully printed, perfect-bound copy of my first novel in my hands, and it’s a singular experience I’d never known. I’ve known lots of emotions, done a lot of things, but that one . . . I’m not sure it’s replicable. It was intense.

It was a combination of two emotions. The first was simple:

The second was simple, too:

Um. Excuse me. I want to share this with you.

I ordered ten copies. Which means that, when I got home, when I saw the package, it wasn’t just an envelope. It was a box (ten copies take up a little more room. Not a whole lot. Just a little). 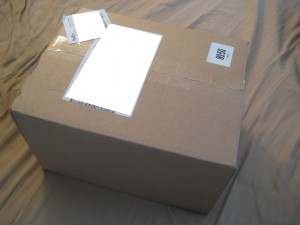 Which was pretty awesome to see.

It was pretty impossible to restrain my excitement in opening that bad boy: 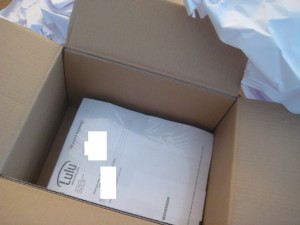 To get to the main package: 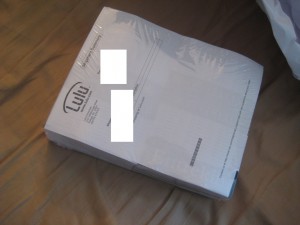 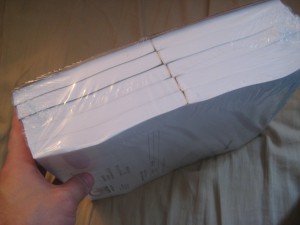 I immediately started ripping into the package:

To reveal the amazing cover: 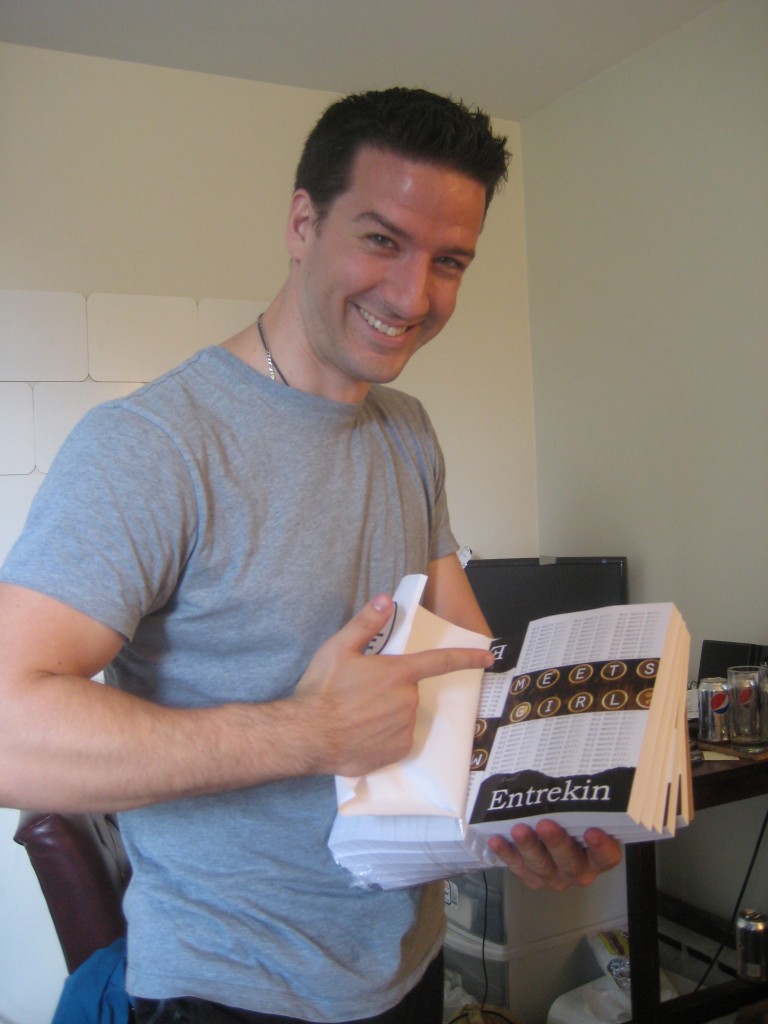 I think it looks pretty good: 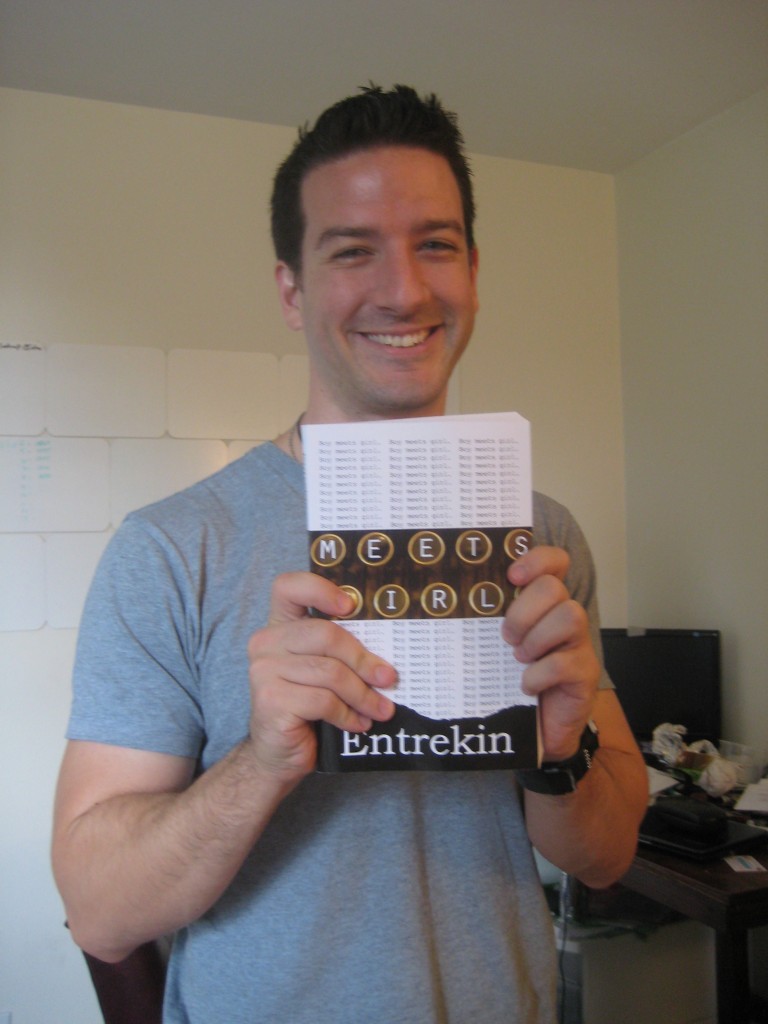 So here’s the cover (which you’ve already seen): 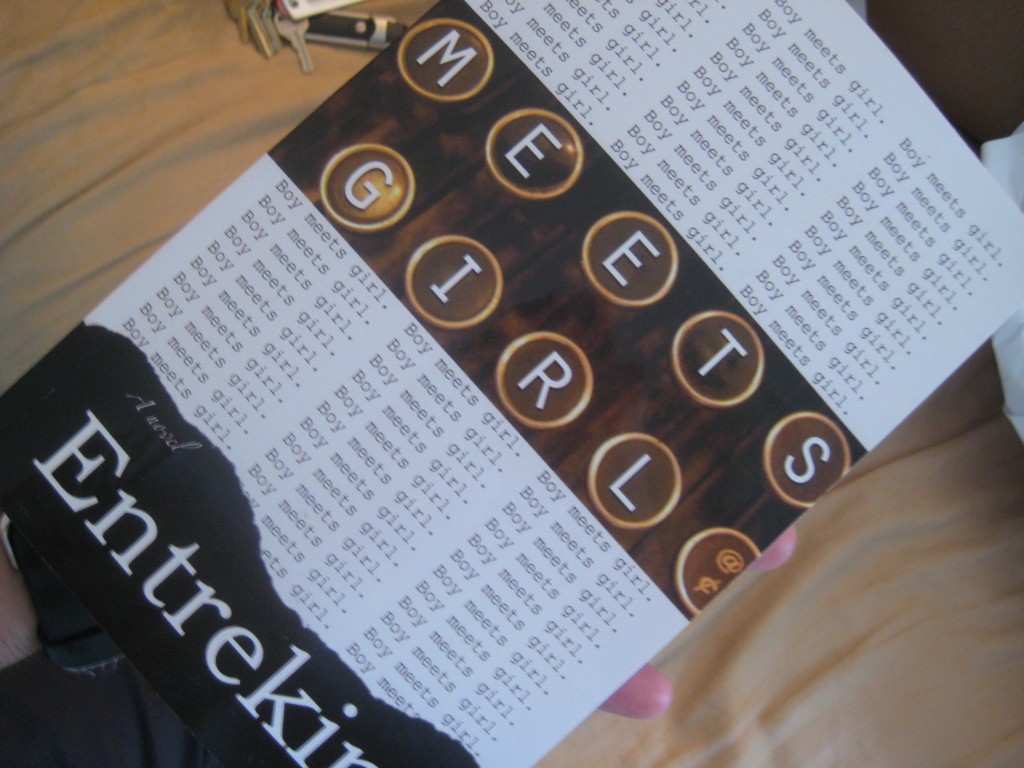 As well as the spine: 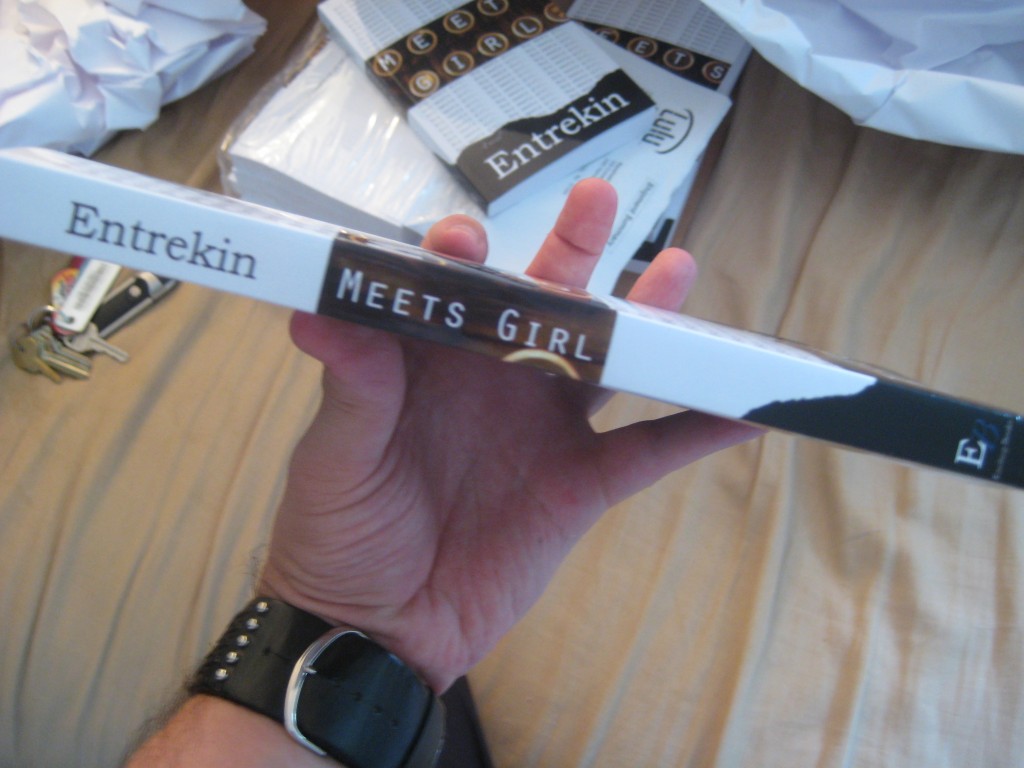 And the back cover:

Which you haven’t, yet, but now have.

Not sure you can make out the back cover. I’ll post the text on it soon.