So, how about Monday’s final chapter of Meets Girl? With the kissing and all? I don’t think I’m spoiling too much if I tell you that chapter thirteen is actually “Kissing Veronica Sawyer,” because how could our young hero narrator resist rhapsodizing about said making out?

Of course, if you want to read it, you’ll have to pick it up here. It’s still only $2.99. I’m keeping it there for the time being. I figure anyone who buys it right now has been following along, and keeping it inexpensive is my way of saying thanks for keeping up.

At this point, it doesn’t look like I’ll be posting any more of the story online. I mean, I won’t rule it out, if someone asks to run an excerpt or something, but here and now I like the cliffhanger, and really, three bucks for the rest of the story–which is really picking up–is a total bargain.

Already, it’s been a solidly positive experience. Reviews are good: Shannon Yarbrough of The LL Book Review said “So it’s romance and fairy tales. But it’s magic and whimsy too. It’s a writer’s lament and a coming-of-age tale (for lack of a better cliché.) It’s experimentation and taking chances. It’s poetry and music. It’s love and art. Boy says so himself…”

Which I thought was great. I liked that Shannon called it a coming-of-age tale, because while the hero-narrator of the story is in his mid-twenties, he still seems pretty immature, for the most part, for most of the story.

And there is a solid chunk left. Somewhere around twenty thousand words.

Does he grow up in the end? I’m not sure. To be candid, I think he has a lot of growing up to do, but I think the events of the story had to occur before he could make any progress. I’m not sure he’s grown up by the end, but I think maybe he’s no longer held back.

Besides, I mean, I dunno: the way I look at it, if a book manages to fulfill the author’s intention, hasn’t it basically failed? Maybe it’s because I’m a writer of them, but books change, and an author needs to give the story room to breathe. If there’s no room for surprise, there’s no room for invention and reality, and I’ll tell you, personally, that of the books I’ve written, none have felt real or true or honest until the moment they surprised me. Meets Girl, for example, didn’t feel complete to me until late in the process of writing it, when Veronica said something that came from her. Not from me, but from her.

It was a moment of real creation. A moment that hadn’t been there before, even in my head.

But so far as such things as intention go, I think maybe you can trust mine about as much as you can trust the narrator of Meets Girl. Which, for me, anyway, is: not at all. I don’t know, maybe you think he’s more trustworthy and reliable than I do, but from what we’ve read so far, even in his meeting with that fabulous-red-haired Tarot reader . . . didn’t she say he was actively closed off to something, and just not seeing them? I’d have to look again to be sure.

But writers lie, my dear.

Me, I’ve always said I save my lies for my stories, because then they become the truth.

The real question, I think, is what’s next. You finish one book and start another. I know, as a reader, I used to have a giant to-be-read pile until I got a Kindle. Now I just have a huge long (somewhat intimidating) list of books I’m meaning to read. And a list that doesn’t get shorter unless I delete a book from the device. 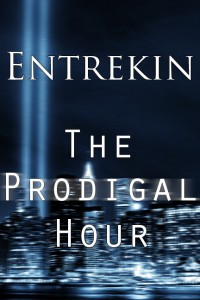 The Prodigal Hour is a big, sprawling time-travel novel. It’s–so far as I know–the world’s first pre-/post-9/11 novel. It’s arguably an epic but most certainly human, and really it’s about Chance Sowin and his friend Cassie Lackesis and what happens when they find themselves in possession of a time machine. It’s got alternate histories and special guests, and I had help writing it from some of the greatest thinkers and storytellers in any medium, including the guy who directed The Empire Strikes Back and another Ray Bradbury called the greatest writing teacher ever.

Right now, I’m working on the lay-out, format, and design, as well as determining how it will be distributed, and through whom. I’m planning a late summer/early autumn release, and I’ll be publishing it much the same way I did Meets Girl; here, and on Kindle, with some physical version available to those who want one.

The funny thing is that The Prodigal Hour will seem like a departure to anyone who’s read Meets Girl and my collection, while I consider those two books the departures because the big, commercial, action-adventure novels are actually the ones I love most.

I’ll tell you more about its availability as I figure things out, but for now, you just have to wonder one thing:

Where will you be when The Prodigal Hour arrives?

What You Need to Consider about the Amazon Breakthrough Novel Award