Meets Girl, Any Way You Want It

Because that’s the way you’ll get it.

I’ve spent the past week coding Meets Girl for Kindle.

(I think more writers should be able to say stuff like that, but that’s probably another discussion entirely.)

I’d originally considered making it a Kindle exclusive. Given that publishing for Kindle doesn’t actually restrict one to the device because Amazon’s app is available on pretty much every platform (PC, Mac, Android, iOS, etc.), I thought just going with Kindle was easiest for everyone.

But I’m rethinking that. Because I started thinking, wait. What if I were a reader who’d bought a nook because I liked Barnes & Noble?

In terms of digital distribution, exclusivity doesn’t make a whole hell of a lot of sense.

Plus, Barnes & Noble’s Pubit platform went live last week. And you know the first thing I did when I got that particular email was sign up for a publisher account.

I’m not going to promise ubiquity to start with, but I am going to make as much available as I can as soon as I can. Meets Girl will go live on Lulu and Kindle on November 29th. I will begin serializing it four weeks before, on November 1st. I haven’t yet decided how much I’m going to ultimately post. I think the first nine or ten chapters, which will basically carry through into 2011. 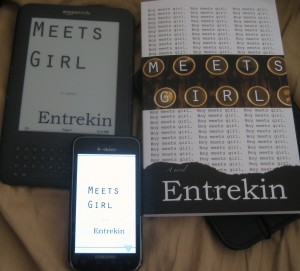 More to come in the next few weeks.

Meets Girl: Sometimes the Greatest Love of All Is Unrequited.