I know, I know: I said I was going to return to consistent form, managed several posts, and then disappeared for months. I mean, I’ve been on Twitter and writing monthly for The Nervous Breakdown, but haven’t really been here since early February, looks like.

Lots of stuff going on these past several months. Early on, much of my attention was focused on my mom, who was sick.

One day I’ll write about all that.

Today is not that day.

Today I want to write about turning 32.

I turned 32 at the beginning of May. I celebrated said birthday in Pittsburgh and had a blast.

I know a lot of people this will find already know that I’ve wanted to be a writer since I was in sixth grade, though I’ve told stories longer. I used to draw. A lot. With a .7 mechanical pencil, which I liked because it could do fine and medium lines equally well; my .5 drawings always seemed too skinny to me. I was pretty good at drawing and did it often enough family members gave me how-to-draw ______ books for my birthdays and Christmases. Lots of those books had step-by-step instructions to follow in order to finally produce whatever was being drawn—a monster, a Disney character, a landscape scene.

Being the sort of person I am, always tried to skip to that final drawing. I would attempt to replicate it, shading and all.

When I drew on my own, my own scenes, I always tried to tell stories with them. They would be the bare essentials of the story—only the plot elements necessary to make the point—but I was never happy because I was never good enough to really capture a climactic moment that really conveyed everything that had happened to lead up to that moment.

Reading Needful Things when I was twelve or so came as a revelation. I loved the book, yes, but what it really revealed to me was how to do what I’d always wanted to do. How to create something that could, in someone else, fully inspire that singular sense of wonder and awe. That Holy Shit moment.

There was only one problem with realizing that by way of Stephen King: by then (the early 1990s), King had achieved a position of literary stardom few really ever manage, and usually not on so great a scale. There is really no equivalent to the sort of renown Stephen King managed during the 1980s, either before or after. To wit: Fitzgerald and Hemingway probably achieved some fame, and Mailer, too, but that fame was mostly restricted to a particular section of our culture. Did people in the 60s or 70s actually know what Mailer looked like?

Nowadays, a few authors are, by name, as famous as Stephen King: Brown, Rowling, and Meyer are probably the big three.

I’m pretty sure I’d recognize Rowling—mainly because I confess to having a crush on her. I might recognize Brown, mostly because so many profiles I’ve read go out of their way to connect him and his mock turtlenecks and tweed blazers to his major protagonist, Robert Langdon. I don’t think I’d recognize Meyer.

I’d recognize their characters, of course. Tom Hanks, Daniel Radcliffe, Robert Pattinson: they’re largely the ones who get the attention the books inspire.

A few years ago, when I was living in Hollywood, my roommate worked in a clothing store and reported that Stephen King had stopped in briefly. This was relatively recently. I’m not sure he’d have realized if Meyer or Brown had walked in. Maybe Rowling.

Stephen King, though, managed a different sort of fame. He wasn’t famous for a character; he was famous for Stephen King books, in the same way John Grisham was famous for John Grisham books, except King was more famous. I don’t know that the average person would have picked John Grisham out of a line-up. But people knew King. He appeared on some late-night talk shows. He did a commercial for American Express (I’m fairly sure he told Neil Gaiman that he wouldn’t have if he’d had it to do over again).

I bring all this up because that level of renown, that level of success, literary and otherwise, for me, personally, got all wrapped up with actually writing cool books. Needful Things was the first real, adult, mainstream novel I read; before that one, they were all The Hardy Boys and A Wrinkle in Time. Mostly young-adult novels, in other words. The mid-1980s equivalent of Harry Potter, except not as good, long, or substantial.

I didn’t actually steal Needful Things from my father’s library; I just plucked it from the bookshelf. There are a couple of somewhat erotic moments in the novel—a rather vividly recounted wet dream at one point—but I wouldn’t say anything exactly graphic. Certainly not as graphic as King could be if he wanted to. But I remember reading it over the course of a week or two, and I very vividly remember finishing it, and I remember, when I put it back on the shelf, I did it knowing that, some day, I wanted people to have shelves full of my books like my dad had a few shelves full of King’s. I remember, in fact, growing up, and that my father and uncle used to trade the books back and forth; I think they split it so my uncle would buy one, read it, and then give it to my dad, and then my dad would do the same with the next. I remember my uncle visited, one day, solely for the reason to give my father an already beat-to-shit paperback of The Drawing of the Three, the second (arguably best) installment of The Dark Tower series; I’m sure he probably stayed for a beer, but the book was the reason for the visit.

That was what I wanted. At twelve.

The reason I worried about how I’d feel, turning 32, is that, two full decades later, we see how that all has turned out so far.

Thing is, as my mother’s been getting well again, as I’ve been teaching and now personal training, as I’ve been living in Manhattan again, I’ve also been reevaluating a lot of those things. When you grow up with one idea in mind, and you dedicate all your time and effort and energy to it . . .

A few months ago, I went to see Rock of Ages, which is a Broadway musical full of Constantine Maroulis and all the hair metal you can think of besides Def Leppard’s, which wouldn’t give up the rights, and which the production makes several jokes about (I bet Def Leppard is kicking themselves about that right now. Seriously missing out on a shit-ton of a lot of things, not the least of which is being a part of something so awesome). The musical’s story is nothing ground-breaking; it’s about a guy who moves to Hollywood to sing. It’s all he wants to do.

Really his dream is to be as uber-popular and “cool” as the rockstar, who rocks up on stage in the sort of sequined jumpsuit Liberace might have envied, the embodiment of 80s hair-metal sexcess. I don’t remember the plot development, but Constantine gets an opportunity to sign with a major label who wants to make him that successful, give him that level of pop-rockstardom, and he takes it. Tiger Beat comes calling.

At some point, though, he realizes it’s not him. He doesn’t want the magazines and endorsement deals and the clothing.

He just wants to sing.

He gets his Dream and realizes it’s not what he wants. “Careful what you wish, you just might get it” was probably already an old sentiment when Metallica sang it on Load.

One of the characters comments on that (the musical is totally meta-tastic. It’s awesome). He says something like, “Sometimes the dream changes, and that’s okay.”

But as he was saying it, I had my own realization. Which was stupidly simple, and forgive me for sometimes being a guy of little brain, but: just because the dream changes doesn’t mean it’s not still a dream.

Hell, if the dream changes, there’s a chance it could be even better.

Dylan was right about the times: they were a-changin’. They’re always a-changin’, and my, how they’ve a-changed. Just like a dream, though, the times can change all they want, but they’re still the times, and they’re still everything you make them.

I was worried about turning 32 because I hadn’t achieved that dream I’d had for those decades.

What I realized, though, was that I’d achieved something else entirely, and it was time to make it everything I could.

I don’t yet know what that means, but I’m looking forward to finding out. 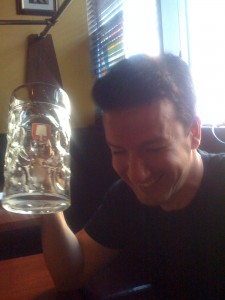 What Writers Can Learn from Superbowl Ads