Is Blogging Worth It, Writer? 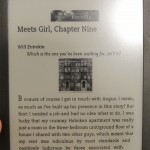 I suppose that depends on what is meant by “worth it.” I wish I knew what our supposed seeker hoped to find (and, indeed, hoped he or she eventually found it). Let’s suppose it was a guy so I don’t have to worry about non-gendered pronouns: what were his motivations? It sounds like the kind of question a beginning writer might ask, doesn’t it? A writer who was just taking to page, just beginning to set words down. A new writer, who knew he wanted to write but not yet how, and maybe even not yet why.

Honestly, for a new writer, a beginning writer, I’m not sure it is worth it, and I’ll tell you why: that noise. The Internet is not a place to find your voice. It’s not a place to learn how you sound.

To do those things, you have to listen. You have to write a lot. You have to listen a lot to the sound of your own voice in your head. You have to indulge in a bit of narcissism, really. You have to set down a lot of words for yourself alone. Maybe for your friends. Maybe find an adviser, a mentor. Someone who’s been writing for a while, who has a style and voice all his or her own.

I’d thought, when I started blogging, back in 2005, I knew my voice. I’d written close to a half million words by the time I found MySpace, and I took to it without much reservation. Which wasn’t a bad thing, exactly, but it’s worth noting: all the blogging in the world isn’t going to make you a better writer. It may get attention. Maybe you’ll blog and share and post and one of the big 6 is going to come knocking at your door to offer you a six-figure advance (against royalties, importantly), but what’s that book going to become? It might also get the wrong sort of attention, when you’re not ready for it. I don’t know if I was or wasn’t, but I know there came a point where I had to be quiet while I figured some things out.

So if your aim is just to write and share, with emphasis on the former, maybe reconsider. It’s a noble goal, don’t get me wrong, but maybe concentrate on what you’re writing moreso than what you’re sharing, at least at first. At least to begin.

But, young writer wondering if blogging is worth it, also ask yourself: do you want to be a blogger, or a writer? Is your aim more traffic, or something a little more complex you can’t put your finger on?

My advice, for any young writer wondering whether blogging is worth it: forget it. Go to school instead. Find a master’s program with teachers you want to study with, and immerse yourself there.

Also, forget the advice you’re going to read (including, of course, this very advice here). Somebody–I think it was Maugham–said there are three rules to writing but everyone’s forgotten them. The problem with advice on the Internet is the simple: a lot of the opinions–which is what pretty much everyone is spouting, regardless of how stridently they are presenting it–well, they aren’t so well founded. You, young writer wondering if blogging is worth it, are going to encounter people who tell you they know how to write a book but haven’t actually done so. You’re going to read people posting about the five secrets to marketing your book, or the seven rules of social networking, and those posts are going to be written by people who haven’t taken business courses, and for whom social networking is pretty much the only networking they’ve ever actually done.

And it’s going to be impossible to sift through them all.

Whom do you trust?

And you’re right, there are.

So what do you do?

When you surprise yourself is when it becomes real. Because I’ll tell you something real: the moment I became a writer was the moment I wrote something that wasn’t there a moment ago, not even in my head.

This one is about you.

I hope you found what you were looking for. I doubt you did, because like you, I had to be quiet for a while. You see, I’m telling you that because I was there, once. I was searching for advice, and wondering if blogging was worth it. Wondering if traffic was going to get me anywhere. Wondering if one more Twitter follower was finally going to get me a book deal like that Crap My Father Spews guy and wondering how to get that one more follower, that one more hit to my site. Which is exhausting.

It wasn’t that long ago, in fact.

I don’t know about blogging, but I’ll tell you what’s definitely worth it: the words. When you write them from that quiet? That’s worth it.

You have to be quiet for a long time to be able to achieve that quiet easily, to be able to write from stillness, but when you manage it, that’s worth it. Because when you think of blogging, when you think of writing for free, of sharing your work with little regard to reward, either monetary or otherwise, what makes it worth it is doing something honest.

That’s what you need to find. What’s going to make an editor want to kick you in the head? What is going to make someone pull their head because it’s so good but so idiosyncratically you?

Can you find that online? Can you discover it by blogging?

And look, I’ll be honest: in terms of blogging, this isn’t exactly a successful site. It could get a lot more traffic. I probably have to change the SEO thing or something. There were no new updates for months at a time for the better part of a year. When once people not only expected but also enjoyed regularly reading the stuff I shared online, I again need to cross-post everything everywhere and hope people share and RT it and all.

But: while being quiet, I wrote a novel I’m really proud of. It’s called Meets Girl. I also contributed to and published a short story collection I’m also really proud of, Sparks. That one you may have heard of; it was an Amazon Hot New Release over Christmas. And I won’t call either great–because is that really the place of any writer?–but the people who’ve read them have liked them a lot, and I think that counts for something. And I did that by being quiet for a while, and deciding that what was worth it, for me, for a while, was not traffic or blogging or publicity but rather, simply, writing well and finishing a good book.

I’ll tell you, truthfully, it’s a better feeling than a traffic spike. I don’t know much, but I know that. When someone tells you they were blown away by something you wrote, there’s a little more significance to that statement than a simple Twitter RT, and that can mean the world. I don’t know if blogging is worth it, hypothetical seeker, but I know that feeling is, and I hope, regardless of whether you decide to start blogging or not, you find that out for yourself.