How Reading Stores Might Survive If Book Stores Can’t

November 15, 2011 / Will Entrekin / Comments Off on How Reading Stores Might Survive If Book Stores Can’t

One of the thoughts I developed as I completed my MBA was that there’s really no such thing as products so much as objects that facilitate services. Nike doesn’t sell shoes, really; it manufactures shoes and puts them on shelves, perhaps, but the heart of its business is athletic performance.

The paper, the leather, the boards and spines and glue: these are physical aspects that merely facilitate the function of a book, which is to deliver information, whether that information is non-fiction data meant to enlighten or fiction stories meant to transport.

You don’t have to take my word for it: here’s a chart from the Association of American publishers, by way of : 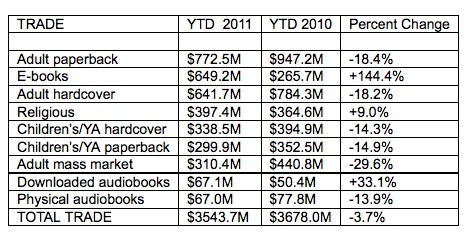 Shorter: cumulatively, print sales among adult and YA hardcover are down 96% (across 5 categories: adult hardcover is down 18% on its own), while ebook sales are up 144%.

Now, it’s true that ebooks have been a small part of the market, and an increase from 6% to 12% would be huge, percentage-wise, but small in the market. But other reports are that ebook sales are accounting for 20% of revenue from corporate publishers.

What we read isn’t changing. How we do so is.

And so to bookstores.

What do bookstores sell?

If you said, “Er. Books. Duh,” you haven’t been paying attention.

They’re not bookstores. They’re reading stores. Up until recently, we’ve read paper, so it’s made sense that stores that wanted to sell reading experiences had to sell books. That’s been how we’ve read.

And I think the wrongest possible thing to do is to try to cling to books. Bookstores that cling to paper will fail as people purchase e-readers and tablets. Because people are buying e-readers and tablets, and they are reading on them, and if you want to sell reading, you have to sell what people are reading, which is becoming less and less about books and more about content.

It’s not helpful. To bookstore owners, to the publishing industry, and most of all, to readers.

Telling readers who want to read on screens they’re wrong is cutting off your own business to spite your face. It’s like telling people who listen to music on iPhones they’re wrong for not listening to 8-tracks.

If I were a reading store, what would I do?

It’s simple: my first step wouldn’t be to boycott Amazon.

My first step would be to go to Amazon.

The Kindle is the most successful reader in the digital reading market. Barnes & Noble’s Nook line is a competitor, but it seems not to be close: for people who want to read, Kindle is, lately, the way to go.

And for that reason, I’d make myself an expert in Kindle. I’d know dimensions. I’d know what files it supports. For people who’d rather have a Nook because it supports ePub, I’d make it my mission to know the software that converts between formats. For people who don’t own Kindles, I’d happily inform them that they can read it on all their devices. Got an iPad? Yeah, Kindle works on it.

Of course, going to Amazon might not be the best idea.

To wit: reading choices are no longer about what books to read but what devices to read them on.

Why not sell them all?

Look what other retailers are doing. Walmart features the Kindle Fire on the cover of its Black Friday circular.

Do you think Walmart employees are going to be able to explain to customers why the Kindle Fire is a better choice than the Nook Color, and both are better than the iPad (or vice versa)? No. It’s Walmart. It’s Best Buy. A few consumers might get lucky and find a knowledgeable employee to explain why ePub support is actually a great thing, but how many are even going to know what ePub is in the first place? Most don’t care about ePub; they just care about the system they know and the spot that has their information already, which makes ordering from them such a total snap, and they’re going to purchase accordingly.

Now, I’m not advocating that reading stores get rid of paper books altogether, but I would argue that reading sellers might have to become more selective about the stack of paper they carry. Those books that sell three copies per year? Why take up shelf space one could devote to Kindle/iPad accessories instead?

Why not stock only the steadiest sellers? The Great Gatsby, Stephen King, To Kill a Mockingbird. James Patterson during the summer. Hell, keep the Twilight end cap but stock it with Blu-Rays, sparkle pens, and tie-in journals, which are all where the real Twilight money is, anyway. Maps and globes are more important to keep in stock than travelogues people are going to download on their Kindle, anyway, because it lets them travel with so many more books.

One more idea: what about Indie Bookstore Amazon Imprints? Saint Mark’s bookstore in Manhattan has been having trouble paying its rent; it’s a famous, privately owned bookseller its neighborhood loves. It’s like a local pub for its patrons, except most don’t drink there anymore. Why not a Saint Mark’s Amazon imprint of high-quality literary novels? Maybe a bookstore dedicated to mystery and crime fiction could ally with Amazon’s mystery imprint, and stores devoted to science fiction and fantasy could do the same with SF&F. Comic book stores could partner with a comic and graphic novel imprint.

Point is, there are lots of possibilities. One very real one is sinking deeper by attempting to cling to outmoded business practices when consumers have already moved on.

Occupy Morality, or: Are Occupy Writers Doing It Wrong?