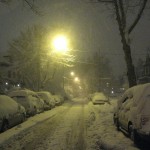 Treats by Sleigh Bells. I couldn’t stop listening to this CD, which was terrific and jaunty and bouncy and fun. Especially the first two songs.

Maroon 5’s new CD, as produced by Mutt Lange, was terrific, too. The video for “Misery” was terrific.

Otherwise? I watched a top video countdown last weekend, and most of the rest of the music . . .

Good to see Eminem back, though. I’m going to expect more exciting things from him.

Besides music, some videogames: the new Batman game was terrific, and Dante’s Inferno had me occupied for hours. Batman kept me through to the end, too; I’m one of those basically casual gamers who can only take being stuck at a given spot for a while before I get first frustrated and then annoyed and then stomp off to do something better.

I think, though, it turned out, for me, what really made my year was technology. Back in July, I bought a Samsung Vibrant on the day it was released. I loved it, mostly. Great little phone. I’ve been using T-Mobile since 2001, and it was a standout. Great camera, great screen. Didn’t love the Samsung interface (TouchWiz, they call it), and didn’t love that it had no flash, and didn’t love the battery life.

Which was why, when Google announced the Nexus S, I jumped ship. Awesome phone. I gave up the HD camera and the internal storage for better battery life and stock Android. Seemed a fair trade, even if, you know, as a consumer, I wish there were a phone I wouldn’t have to make a compromise to own.

The Vibrant also, indirectly, led me to buy a Kindle.

I’d gotten a job training, and so I was commuting more into Manhattan, riding the PATH trains into the city every morning and night, and sometimes several times a day.

And I got bored.

The Vibrant comes with Amazon’s Kindle app installed. One of the first books I downloaded was my own collection, just to see how it looked.

Then I browsed the free books. Pretty soon I was reading Lewis Carroll. And then I discovered samples.

And then I loved the sample for Lev Grossman’s The Magicians, but I stopped reading it because I think, subconsciously, I’d already decided I wanted a Kindle and was going to wait for the bigger screen.

And so I got a Kindle in September, and it’s absolutely the best purchase I’ve made in ten years. I bought it after I’d already looked at both iPads and nooks and decided neither suited my needs.

First there were samples. Then books. I think The Magicians was the first I read. And it was pretty good. I loved the first hundred or so pages before it started to unravel and then, unfortunately, collapsed. The opening, for its part, was spectacular.

Richard Kadrey’s Sandman Slim was the first book I loved. Kadrey writes a fantasy noir that’s like Chandler met the Devil, and it’s brutal and dark and funny and amazing. Seriously, one of the greatest books I’ve read in, well, ever. And it was free when I bought it, which was a smart move on its publisher’s part; like any good junkie, the first thing I did when I finished it was bought his other book, Kill the Dead.

That was a while ago. I still haven’t read it.

Not because I haven’t had time. I’ve re-read Zen and the Art of Motorcycle Maintenance in the meantime, and started a bunch of other books, as well.

No, I’m saving it. Me. A Taurus who likes quick gratification only if it can’t be instant.

That’s how good Kadrey is.

Right now I’m reading Frank: The Voice, a bio of Sinatra. After which I plan to hit Clapton and Richards, and then return to the other memoirs I was reading, which were mainly about the food world: Bourdain, Ramsay, Buford.

I kept meaning to post a best-of books list last year, the best books of the past decade, all that. But I kept getting worried about what people would say when they saw my own books on them. So I haven’t. I’m not sure I will. I think I might just start talking more about books I love, like the above.

Because that’s the other resolution for 2011: to share more. I’ve been writing a lot during the past couple years I basically stopped posting online. It was because I felt like I was promoting myself more than my work. That was why I published my collection.

The problem, though, was that I’d never thought of myself as a short-story writer, or an essayist, or a poet. I’d never loved those forms. Not like I’ve always loved novels. I think I had trouble viewing my collection as much more than an experiment, even as mostly positive as both the experience and the response were.

This isn’t the case anymore. I’m really proud of Meets Girl, and I keep getting sad it’s not made the 2010-year-in-review lists I keep seeing, but then again there’s no reason it really should: published too late, and independently at that, so I can’t fault people for not having gotten to it yet.

I’m also really proud of Sparks, which cracked the top 50 bestselling short story collection list on Amazon three days after it was published, and was a top-20 Hot New Release over Christmas. Plus, the stories are fantastic, if I do say so myself, and you know, I don’t have to, because my editor did, first, and now readers have been, too. And what’s better than that?

I always wanted to write better and reach more readers. Now I am. That’s a fine way to end the year.

Which is why my resolution for 2011 is to write more (and better) and to keep reaching more readers.

Right now, I’m planning to publish The Prodigal Hour the same way I published Meets Girl. I’ve already begun formatting it for Kindle, and I think it looks pretty solid. I’d like to do more short stories, as well, and work with more co-authors. And finish my MBA in marketing. And start a PhD.

So here’s to that. Here’s to you. Here’s to reading and writing and movies and music. Here’s to food and wine and friends and love. Here’s to making 2011 the most exciting year yet, because I think that’s one thing 2010 has taught me: it’s not enough to hope for an exciting year. It’s better to make things exciting, and share them.